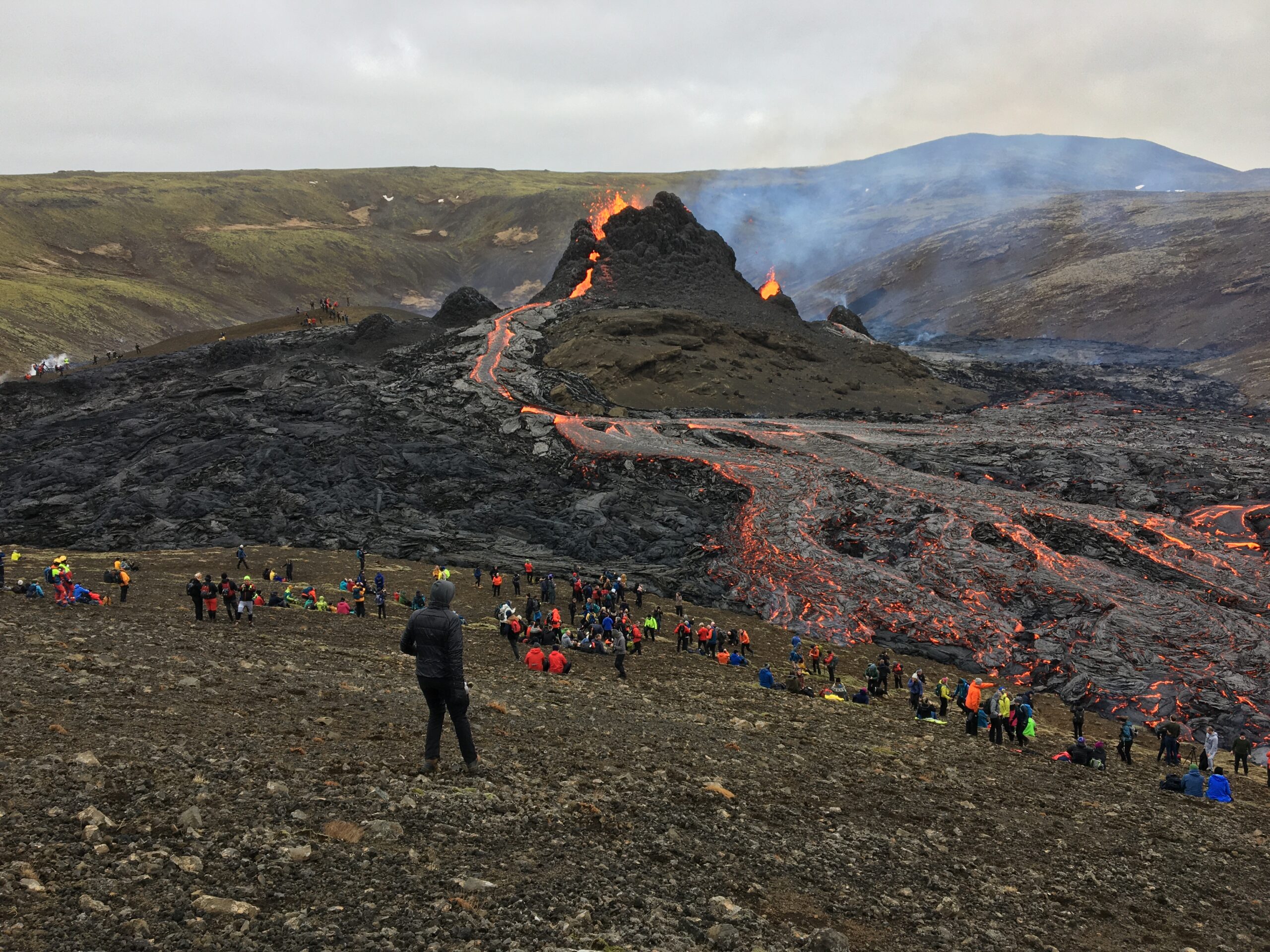 Early in 2020, a period of crutal movements and earthquakes started within the volcanic systems and fissures swarms at Reykjanes Peninslua, west and southwest of Reykjavík.

Early in 2020, a period of crutal movements and earthquakes started within the volcanic systems and fissures swarms at Reykjanes Peninslua, west and southwest of Reykjavík. Interpreted as common plate spreading (rifting) in Iceland, the unrest went on month after month with some earthquakes over magnitude 5 as well as evident land elevation changes that are interpreted as magma injection ito the crust. The town of Grindavík and the Blue Lagoon are close to the main earthquake centres but material damage was very slight. The series of eartquakes and the volcanic eruption can be interpreted as a start of a period of repeated volcanic events in more tha one of the four volcanic systems on the Reykjanes Peninsula.

In late February 2021, the crustal movements and earthquakes intensified. In early March, it became evident that the plate movements and magma pressure had produced a magma-filled, vertical fissure (a dyke) in the crust 7- 8 km NE of Grindavík, in rather remote and secluded highlands (east of Mt Fagradalsfjall). Sureying and various data indicated a 8-km-long dyke and deep-spource eathquakes indicated magma on the move at a depth of 12 to 23 km; at the boundary of the crust and mantle. The episode included over 30,000 earthquakes (up to M5.7). The red line on the map (Iceland Met. Office) shows the dyke and grey areas indicate where stress release from the dyke caused a very pronounced array of earthquakes.

On 19th of March, the volcanic eruption started in Geldingardalir valley system fom a short fissure with five vents, rapidly merging into one lava ring-cone with two vents. On April 5, a new eruptive fissure appeared at a higher elevation about 700-800 m northeast of the active crater with two main vents, forming more spatter cones/lava rings while spectacular steep lava rivers that entered a near-by and much larger valley system. Then, on April 6, and 10, more vents opened up between the older ones, adding lava to the Geldingadalir valley system which started to overflow on April 16. Up to 8 vents have erupted simultaneously along the feeder-dyke but at least three are silent by now. Two sections of the dyke, NE and SW of the active part, are seismically active, especially 2 to 3 km NE of Mt Fagradalsfjall. The area has to be denoted as a possible site of new eruptive fissures.

Five short volcanic fissures have, stepwise, opened up along the dyke (as of April 23rd). The eruptions are small, quiet and effusive ones with some lava fountain activity, no ash to speak of and a initial discharge, each fissure, of a few cubic metres of lava per second, flowing into small valley systems. The total discharge has varied between 5 and 10 cubic metres per second. By 23rd of April, the total volume of lava is only approx. 22 million cubic metres, so far, and the lava flow covers 1,2 square kilometre. The event has to be classified as a minor eruption series and so far, it poses no threat to infrastructures or towns/settlements. The magma type is basalt, derived directly from partial melting of mantle rock, at a depth of 17 to 20 km.

ALL NEWS
BACK TO TOP